For my first ‘PIGEON RACING’ interview I speak to rising star Adam McNamara, who is a recent recruit from Ireland to Richard Fahey’s stable

Adam rode his first winner in January on SUMMERINTHECITY at Chelmsford:

and last week also steered GABRIAL THE DUKE and FOOTLIGHT to all-weather victories at Lingfield and Southwell respectively. I hope you enjoy our chat: 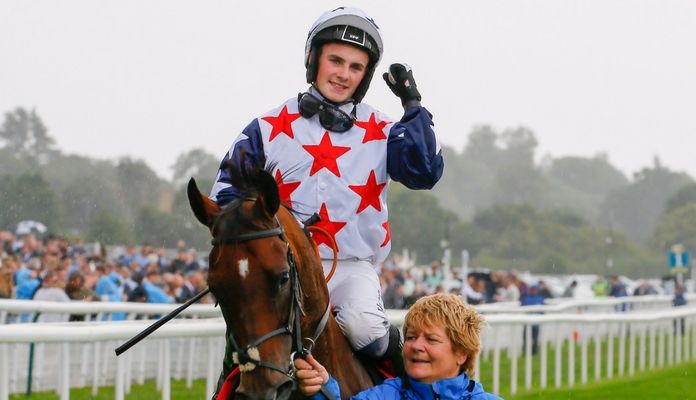 Who inspired you into racing and when did you first realise you wanted to be a jockey?

I had started playing a game called Polocrosse with my dad aged 13, and was fairly successful at that. I was on the Ireland u16 team and played an international tournament, but I felt there was nothing else to achieve there. I had always watched the Grand National and gone to local point to points, then one day I happened to see Frankel winning his last race and became obsessed with racehorses from that point on. I start riding out with a local trainer called John Gleeson and he was always very supportive and had plenty of faith in me. I realised I wanted to be a jockey after a few weeks with him

What age did you first ride

I was 13 the first time I sat on a horse, joined John Gleeson’s stable aged 15 and rode in my first race last January at Dundalk. I was 17 at the time

I’d say my strengths are I have a cool head and I like to think I can keep a horse comfortable and together. My weakness would probably be that I have a bit of strengthening up to do in a finish

Who are your jockey idols

Johnny Murtagh would have to be an idol of mine, his success in the saddle was emphasised during the time I spent as an apprentice with him. The trophies and cups in his cabinet are the stuff dreams are made of. At the moment I really enjoy watching Pat Smullen ride, for me he’s one of the strongest and tidiest jockeys around and I don’t think he gets enough credit

Sammy Jo Bell always gives fantastic advice, she has a great racing brain. There’s also a lad in the yard called Sean Huggan who breaks in all the yearlings and rides any difficult ones in the yard. I spent the winter doing half the yearlings with him and I feel I’ve learnt so much from watching him and speaking with him. He’s the best horseman I’ve ever seen and he’s like a mentor to me

My first ride was Bumble Bee Slim in Dundalk last January. First winner was Summerinthecity in Chelmsford in January

Favourite horse and one you’ve ridden

Frankel would definitely be my favourite to watch, he was exceptional and Tom Queally was always good on him. Summerinthecity would have to be my favourite horse to ride, he’s an old legend, always does as you ask him and tries his heart out

What is the best horse you have ever ridden?

I’ve been lucky enough to ride out Gabrial at home once, he’s been a great horse for the team and gives you a great feel

I’ve only ridden there once but I really like the Curragh, it’s a nice galloping track and usually the best horse wins

Personally I found Lingfield to be quite a hard track to get used to, it seems like you have to be holding onto them until just before you’re turning in even though it doesn’t exactly have the longest straight, it’s especially tricky over 6f when that first bend comes up so quick

I’d have to say evening stables is the worst part of the job, it just cuts your day up and you don’t have time to really do anything during the day. Either that or the winter weather !

What hobbies or sports do you like away from racing

I follow a bit of football and I’ll watch Liverpool playing when I have the time. Love Conor McGregor in the UFC as well, don’t know if you would have heard of him ?

Get in on ATR + Good Will Hunting

I love the classic Irish tunes, especially a song call On Raglan Road

One horse you’d love to see win at Cheltenham

There’s a horse entered in the Foxhunters called Mr Mercurial that I used to ride out at John Gleeson’s, seeing him win at Cheltenham would be unbelievable. Out of the big races I’d love to see Vautour winning the Gold Cup

What are your ambitions for 2016

Just to keep improving. I want to learn something new everyday and I’m constantly striving to get better. I want to be a better rider at the end of the year then I am now, and anything else is a bonus

Can you give readers a horse to follow for 2016

May be obvious enough but Ribchester looked a nice horse last year and I like the look of him. Hopefully he’ll do well this year

Big thanks to Adam for his time and excellent in-depth answers and I wish him well for the upcoming 2016 Flat season. Definitely one to watch out for !