My latest ‘RISING STAR’ jockey interview sees me talk to Flat apprentice Clifford Lee, whose season recently took a big boost when riding some high profile winners at Haydock including his first career double aboard ORIENT CLASS and LORD BEN STACK followed the next day with victory in a valuable handicap on INTENSE TANGO which was televised on @Channel4Racing

When I was young I used to like watching Lester Piggott and decided I wanted to become a jockey when i was nine years old; I always liked watching racing and the thrill of winning a race looked amazing!

Are you related to anybody in racing ?

Unfortunately I don’t have any family in racing which would have been a big help if there was!

When was your first actual race ride

I had my first ride when I was 18 at Yarmouth on board DUKE OF DESTINY for Mr Ed Walker!

I had my first winner at Wolverhampton aboard PERSONA GRATA in a hands and heels apprentice race for Mr Walker!

My strengths would be the pace of a race, I think I’m good at judging from the front! My weakness would be experience, if I had family in racing or even pony racing it would have been such a big advantage!

The jockeys I look up to in the weighing room are Pat Dobbs, James Doyle and William Buick! I try and base myself on James Doyle, he’s got a great position on a horse very balanced and is strong behind one!

Which racecourses do you like/dislike to ride

The tracks I like would be Haydock, Doncaster and York because they have a long home straight and they give your horse a chance to get a good position. The tracks I dislike would be Beverley, Catterick and Ripon, because they can catch you out if you’re not on the ball. Ripon is very undulating which means you need to keep your horse well balanced!

My boss Mr (Karl) Burke (above) gives me my best advice and then when I’m in the weighing room Dougie Costello, Joey Haynes and Paul Mulrennan give me some great advice when I’m stuck on something!

I’ve rode some nice horses such as SHREWD for Mr Ian Jardine; YOU’RE FIRED and FELIX LEITER for my boss. If I had to choose a horse to ride it would have to be QUIET REFLECTION (below), she has an amazing talent and a great heart; she gives everything 120% everytime! The best horse I have ever ridden would be FELIX LEITER – he was a nice horse always tried his best and liked getting his head in front! He had given me my first class 2 winner at York witch was brilliant!

I wake up about 6 o’clock have a wash and a cuppa coffee then head to work at half past 6! We start at 7 and finish at 1!

Depending if I’m riding I would normally have 4 lots to ride out then sweep the yards after we have finished or top the waters!

Depending on what weight I would have the next day I would have a bit of lunch, watch some racing then head back to work at 4 o’clock muck out and groom 4/5 horses then finish at 6 o’clock!

I would probably go for a run to keep my fitness up and to keep my weight down!

I work at Spigot Lodge for Mr Karl Burke

The worst part of my job would be mucking out, sweeping the yards and walkers

My hobbies would be boxing, football and would play some golf now and again!

My favourite movie would be Seabiscuit, or Taken 1,2 and 3!

I would like to get a winner at Ascot and Epsom racecourse before the end of the season!

I enjoy the all-weather racing as it is competitive and gives horses that are better suited to the synthetic surfaces rather than the truth to excel! I think Newcastle is a very fair track and it is the only all-weather that has a 1 mile straight. It is good that their is an all-weather track in the north as it is more accessible for the northern trainers!

With the right support and horses next year i would like to become champion apprentice and to ride more winners each year!

The horse to follow would be; PARNASSIAN he is a lovely 2 year old, he has won 2 from 2 and still is improving everytime he runs!

Big thanks to Clifford for his time and best of luck to him for the rest of the season which continues with THREE rides at York on Friday in competitive handicaps aboard SOUND ADVICE, WASEEM FARIS and VALLARTA ahead of Saturday when he is due to team up again with LORD BEN STACK 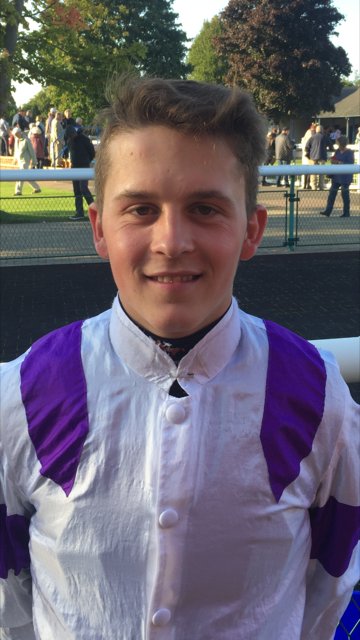